This article is a stub. You can help Object Illusion Wiki by expanding it.
"Well that's a scary thought!" -Oreo's first line in Episode 4.

Oreo is a male contestant on Object Illusion. He joined the game in Episode 4. He had a former alliance with Police Hat and Pudding Cup. He has a strong desire to have a girlfriend, asking Conditioner and Shampoo out, But was declined by the both of them. For those he dates, he will do whatever he can to please them. He is overall kind, and loyal to those he loves. Yet he can be guilt-tripped into doing something to betray them.

Oreo appears to be a chocolate oreo, with white eyes. 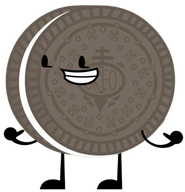 Oreo's new body
Add a photo to this gallery

Oreo joins Object Illusion with Fire Axe, Lemon, Police Hat, and Quadratini. Oreo is chosen along with Lemon and Police Hat to join the #1s. When it is announced that the challenge for this episode would be a killing contest, Oreo gives his opinion, stating that it was a scary thought. Oreo isn’t mentioned or seen for the rest of this episode, and Strawberry wins for the #1s

Retrieved from "https://object-illusion.fandom.com/wiki/Oreo?oldid=6945"
Community content is available under CC-BY-SA unless otherwise noted.